From book to screen : The Hobbit trilogy 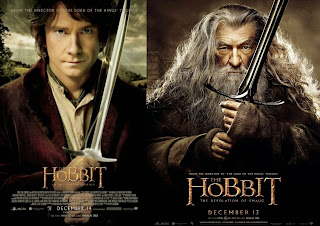 You all know one of the most famous stories in the world : The Hobbit written by J.R.R. Tolkien.
Even if you have never read Tolkien's books, you must know The Lord of the rings trilogy directed by Peter Jackson, based on Tolkien's story. The Hobbit is a prequel of that trilogy and Peter Jackson turned it into three films since 2012. The next one will be release on 17th of December 2014 and will be entitled Battle of the five armies.

But let's talk about the two previous movies. We won't discuss here about the idea of making three films based on only one book, although I have many things to say about it. The Hobbit, an expected journey and The desolation of Smaug. Despite many added scenes, are still good entertaining movies.

The Hobbit is the story of Bilbo Baggins from the Shire, who follow a company of dwarves which need a burglar to reclaim The Lonely Mountain, also named Erebor. The dwarves of the Lonely mountain were driven from their home by a red dragon named Smaug. Sixty years later, the grand-son of Thror, Thörin Oakenshield, King under the mountain, has assembled a company of twelves dwarves to reclaim their realms. Thorin, his friends, Bilbo and Gandalf the Grey will have to face terrible dangers and deadly enemies. Will their former allies, Tranduin and the elves going to help them ? You will have the answer by seeing the film or by reading the book !

I've watched the two first films of The Hobbit trilogy, and I have spent a good moment. Even if I don't like the idea to make three films based on a book, these films are a good entertainment. The special effects are very good, especially Smaug interpreted by Benedict Cumberbatch. You know that I love dragons, and Smaug is close to what I imagined.

So, what are you waiting for, go and see these movies !